In this solo dining adventure, Gary eats a pork sandwich from Roli Roti for breakfast while in San Francisco. 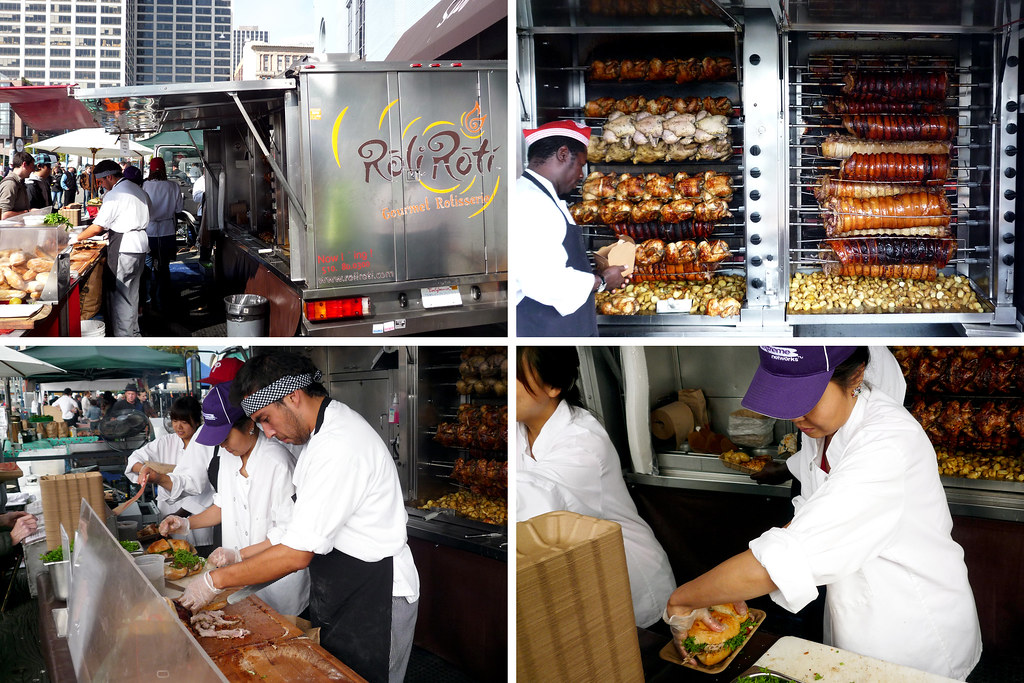 As the date of my departure for six glorious days in the San Francisco Bay Area drew nearer, I realized I had some vague idea of what I wanted to eat but needed some help fine tuning my thoughts. Luckily enough, my friend Yvo over at The Feisty Foodie was in the midst of a West Coast swing that included some time in San Fran so I hit her up for some knowledge. She had a bunch of suggestions but it was the first one that had me salivating as I read it.

Roli Roti truck which is at ferry bldg on Thursdays- porchetta sandwich. It’ll change your life. They have a schedule posted online too.

Porchetta Sandwich. Two words, when put together just makes my heart sing. Porchetta, an Italian savory, fatty, and moist boneless pork roast, in sandwich form? And it’ll change my life, to boot. I’m sold. I’d already had plans to go to the Ferry Building for their Farmers Market on a Saturday, even going so far as to push for a hotel in the Embarcadero area so as to minimize the amount of time it would take to get there (it worked – we literally stayed across the street from the market Friday night). A quick consultation of the schedule on their web site showed that they would be there that Saturday morning. Lunch for that day was set.

Well, at least that was what we had planned. While flying across the country, the U.S. Men’s National Team won their final World Cup group stage match in stoppage time to advance to the knockout round, meaning they would be playing at 11.30am PDT that Saturday. Since the Roli Roti truck would only be there from 8am to 2pm, a porchetta sandwich lunch was now a breakfast. That’s why JP and I ended up wandering over to the Ferry Building on a beautiful, sunny San Francisco day at 8.15am. Heck, we got there so darned early that they weren’t even serving their sandwiches yet! So while they took a few minutes to set up, I took a moment to just stare open-mouthed in anticipation at the different meats rotating in their truck. 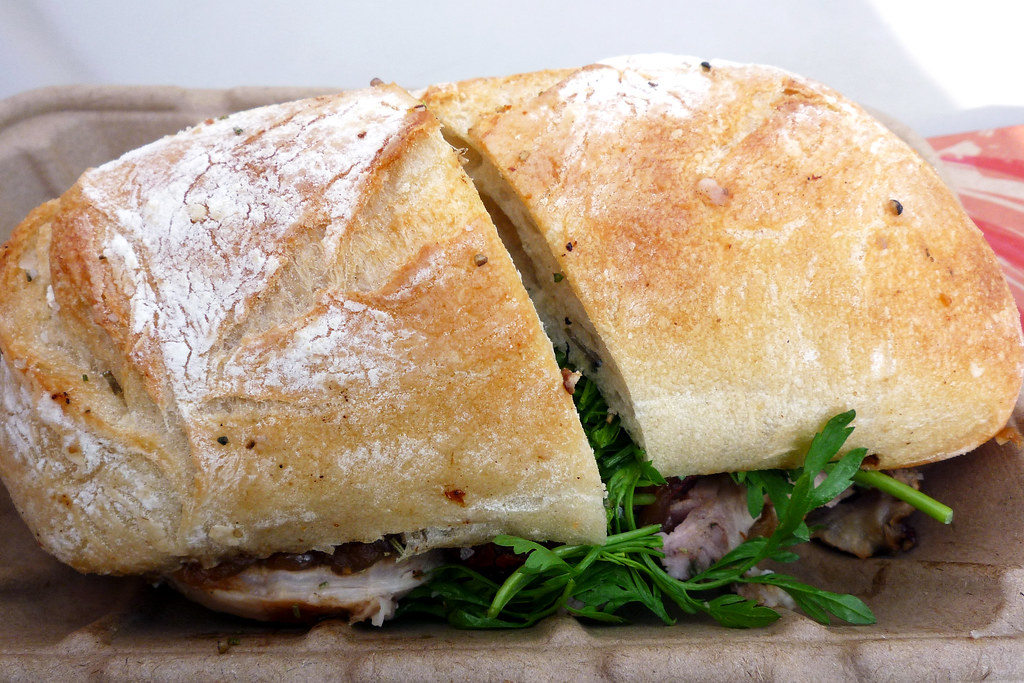 After a few minutes wait, we were finally able to order what JP and I had been looking forward to for the better part of the last 24 hours. It’s fun to watch them work on constructing the sandwich. First, of course, they have to remove the porchetta from the rotisserie. Then they slice the sucker up and chop up some of the crispy skin to put on top of the pork, just in case you were worried you wouldn’t get your fill of pork. Finally, they apply some herbs, greens, an onion marmalade, put both halves of the bread together, and slice the sandwich in half. Next stop, mouth and stomach. 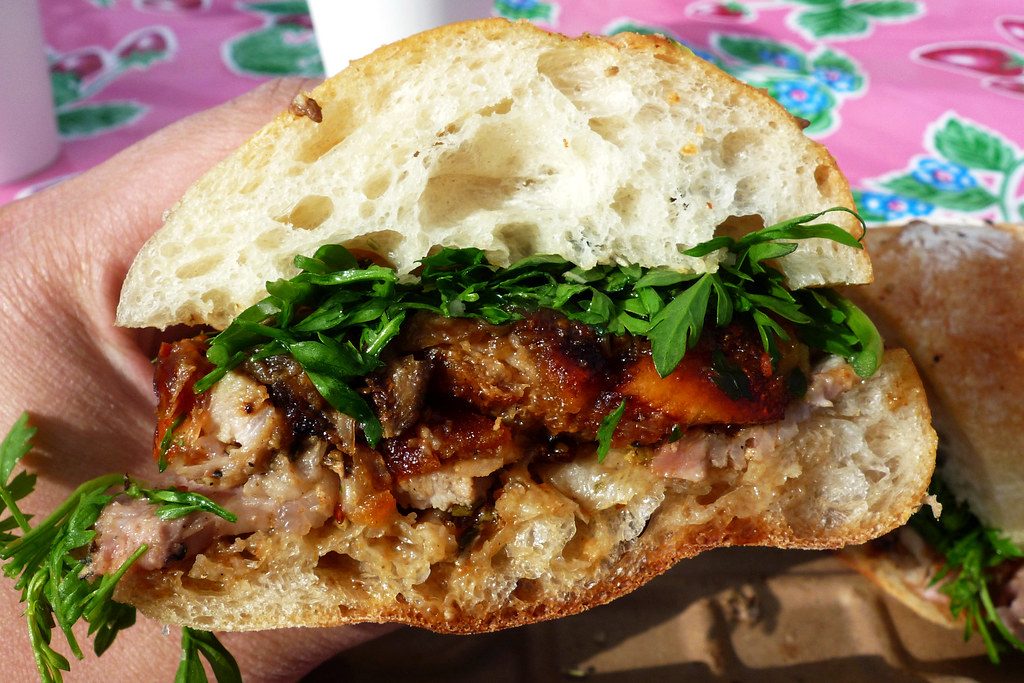 A closer look at the Porchetta Sandwich

Picking up the Porchetta Sandwich as I went to take my first bite, I had to take a photo of the cross-section as it is a thing of beauty. The juices from the meat mingle with the onion marmalade to moisten the bread a little bit. You can see a little bit of the pork but the caramelized skin really dominates the visual here while the greens add a little color. It’s a sexy looking sandwich is all I can say.

It looks good but does it taste good, you may wonder. Hell yes, this is one damned good and tasty sandwich. The pork loin is tender and the skin is crispy with the bread holding up well. The only complaint may be that the pork loin itself could have been saltier but that’s well covered by the healthy amount of salt they apply on top of the meat before closing the sandwich up. 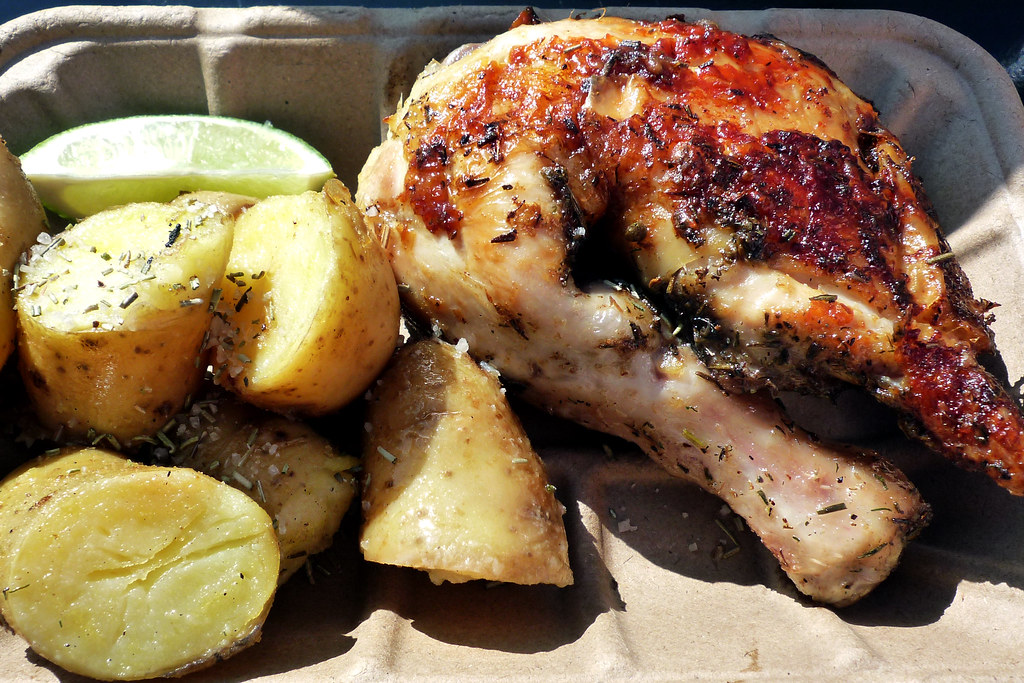 While JP and another friend, Aaron, went to drop off the rental car, Jeremy, another friend finishing off our college quartet, stayed behind to have a nice hearty breakfast of a quarter-chicken and some roasted fingerling potatoes. I didn’t have any of it but it certainly looked good.

I loved loved loved this sandwich. I only wish I had it when I was hungrier and hadn’t just woken up an hour earlier but sometimes that’s just the way it goes. But even at 8.30am with my half-asleep taste buds, I knew this was one sandwich I would come back to whenever I got the chance. At $8.50, it ain’t cheap but it’s a good value for what you get. And what you get is delicious porky goodness between two halves of a bun – totally worth it. Now if I could only get them to come out to the East Coast…