In this solo dining adventure, Gary goes to Just for You Cafe and has the Hangtown Fry, a classic, totally San Francisco dish. 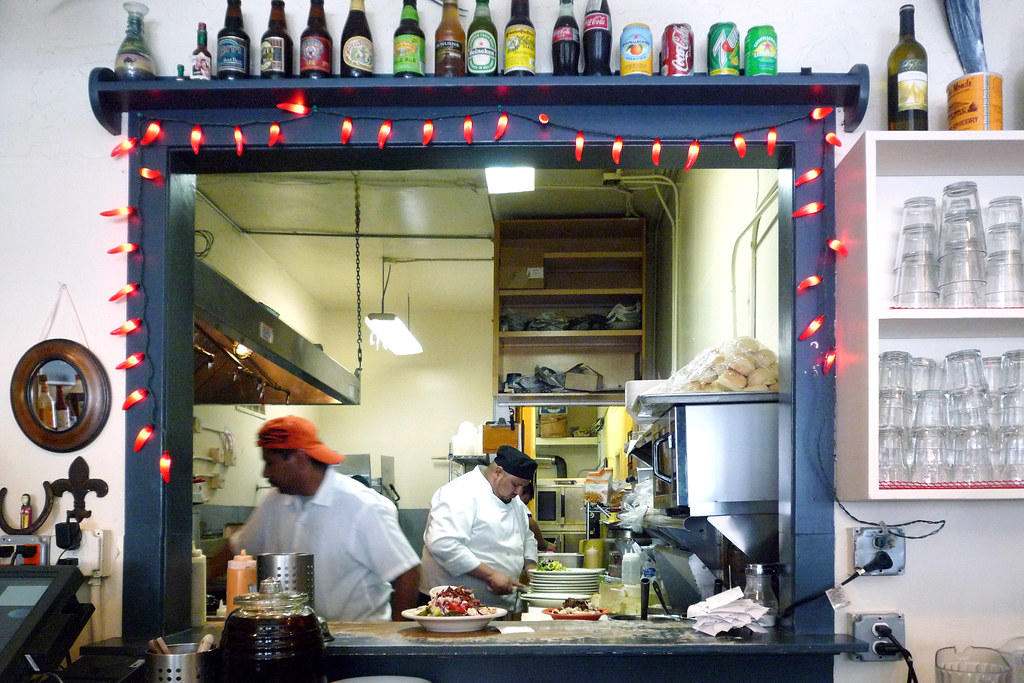 Just for You Cafe

At least that’s one story of its creation. From some research online, I’ve found quite a few but the gold prospector striking it rich seems to be the prevalent one. Veracity of origin aside, it sounds like a tasty dish, doesn’t it? An omelette with breaded and fried oysters plus bacon for the fillings – just writing out the ingredients gets my mouth watering.

The dish, though originating in Hangtown in El Dorado County, somehow migrated west to San Francisco where it quickly became popular. In fact, it’s been on the Tadich Grill’s menu the entire time it’s been open – all 160-plus years of its existence. Yeah, I’d say the good people of San Francisco have taken a shine to the Hangtown Fry over the last century or so.

So when I was planning out my trip the Bay Area to celebrate my forthcoming 30th birthday with three college buddies (2 of whom also turn 30 in 2010), I put the Hangtown Fry on my list of food that I had to eat while out west. As the flight itineraries started to shake out, it turned out I would be the first to arrive out west, a few minutes short of noon on a Wednesday, a good 12 hours ahead of everyone else. Arriving in San Francisco around noon? Sounds like the perfect time to have a fried oyster and bacon omelette!

I walked into Just for You Cafe a little before 2 pm, hungry and hoping that I had missed the lunch crowd. I was in luck as there was an open seat at the counter. Not messing around, I ordered my Hangtown Fry and proceeded to perk myself up with a cup of coffee while I waited for my meal to come out. From my perch at the counter, I could also see into the kitchen and watch as they churned out plate after plate of food. That’s just torture for a guy who’s internal clock is at 5 pm and hasn’t eaten a meal since breakfast at the airport before his 8 am flight. 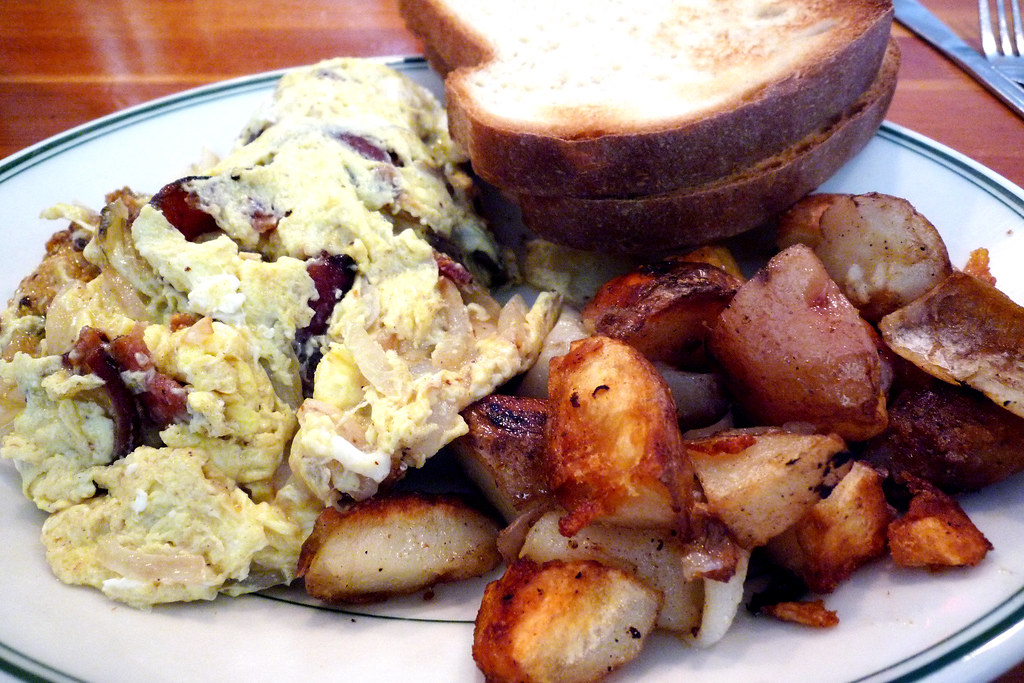 Before I could jump over the counter to grab someone else’s meal, my plate came out. On it was the Hangtown Fry, some home fries, and toasted white bread. I’ll start with the bad – I did not like the home fries. I don’t know if this is how they ordinarily prepare them or if I got a bad batch since we were well past breakfast service but over half of them were hardened chunks. Perhaps they’d been sitting on the griddle for too long and had become overly crisp. Maybe that’s just the way they make them though I’m not sure since a decent amount were still soft and only lightly crisped. I don’t know but they were tough to eat. That’s a shame since I really love home fries and I can usually let a lot slide. I barely finished half of what they gave me. 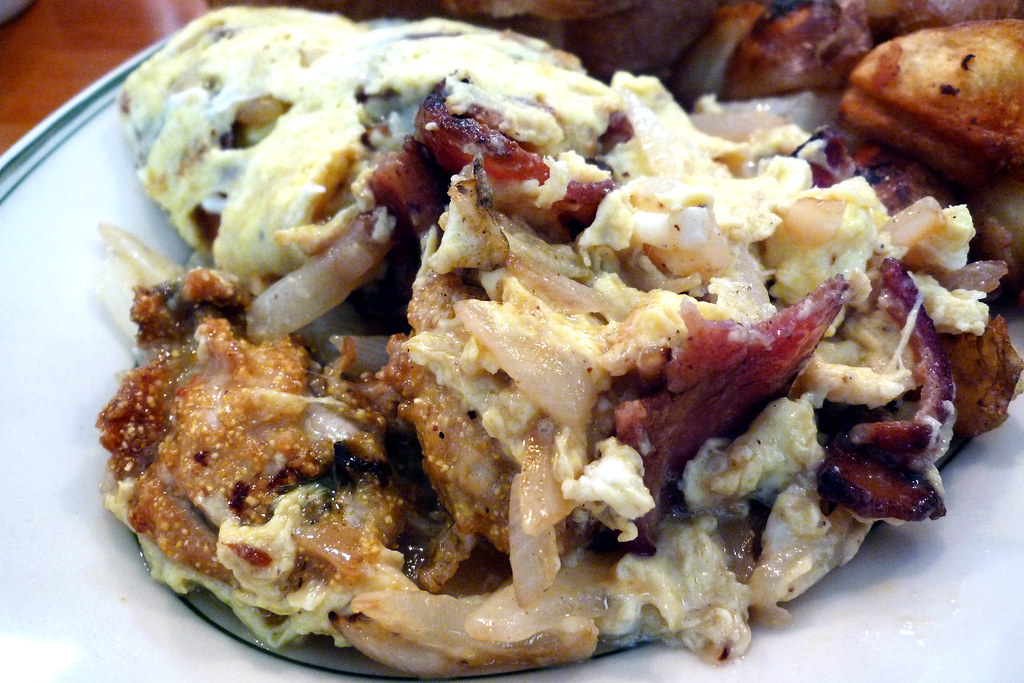 But I didn’t come here for the home fries and you’re certainly not here to read about them. No, I came here for their Hangtown Fry which, at first glance, looks like a mess of eggs and numerous fillings. But once you get past the messy presentation, you’re left with eggs that have cooked to the right consistency – firm but not totally solid – and pieces of salty bacon. Then there’s the oysters – nice-sized oysters that have been lightly breaded and fried but not so much that they become tough, staying soft and juicy. I just wish there were more of them as the three that come in their Hangtown Fry just weren’t enough.

The Hangtown Fry at Just For You Cafe is very good. After all, when you have a three-egg omelette, then add bacon and fried oysters to it, how can it be bad? At $11.25, it’s nearly half the price of the one served at the classic Tadich Grill – maybe they serve one that’s twice as good or maybe the extra money goes toward ambiance. Whatever the case, I’ll stick to the one here. I just wish there were more oysters!

Oh, and skip the home fries unless you like them hard as a rock. Go with the grits.