In this solo dining adventure, Gary stops in at The Bar Room at The Modern, Danny Meyer’s first foray into the uptown New York City dining scene, during Summer Restaurant Week. 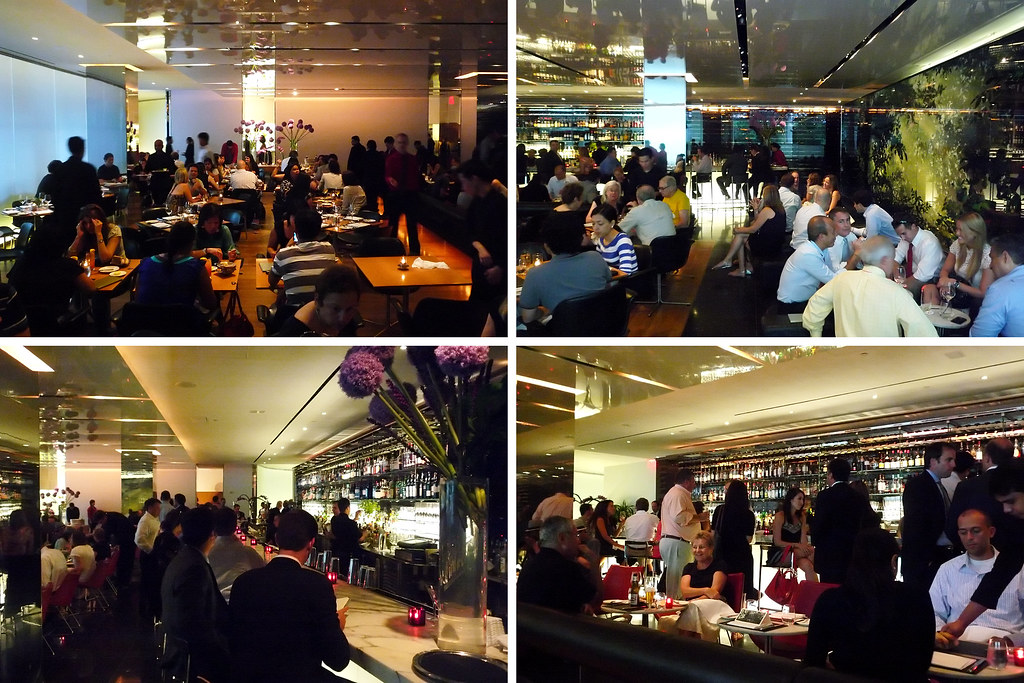 The Bar Room at The Modern

I have a confession to make: I love Danny Meyer restaurants (the man too). I imagine it’s not really a big secret considering all the love I’ve given Shake Shack, his Citi Field offerings, and Eleven Madison Park. Heck, one of my first posts for Eater was the soft opening of the new Shake Shack on the Upper East Side and I (well, not myself but Eater in general) get accused by an anonymous commenter of wanking off to the man. I wouldn’t go that far to describe my level of affinity for Mr. Meyer but it’s not entirely off-base.

So if you’re not a fan of his or his restaurants and don’t want to read effusive praise, then I suggest you not continue any further.

When the Museum of Modern Art (MoMA) underwent a two-year, $425 million renovation, a large space on the ground level was carved out for a restaurant. Danny Meyer won the bid to run the space in 2003 and then spent the next two years executing his vision for it. Not only would this be his first attempt at creating a restaurant concept for an institution, cultural or corporate, this would also be outside of the comfort zone he’d created from the boundaries of his existing restaurants, all a few minutes walk from his home in Gramercy Park. Opening a restaurant at MoMA wouldn’t constitute a gamble but it would certainly be, at the very least, a calculated risk – a chance to show that he could compete uptown as well as being able to play well with others. Whatever you want to call it, it’s paid off because in the five years it’s been open, The Modern has been successful and well-received, as has become the standard for a Danny Meyer joint.

The first thing you notice when you walk into the restaurant from 53rd St and into the bar room is how sleek it is. The ceiling is a shiny, reflective white, the wall of the bar has a metallic chrome look and the wall at the far end from the kitchen is a beautiful looking photo of a forest. All these disparate elements sound hokey together but believe me, it works. The dining room gets plenty of natural light from the adjacent sculpture garden but the light manages to filter into the bar room as well though the use of a transparent glass wall that separates the two rooms. The two rooms might as well be two different worlds – the dining room has an air of formality while the bar room has a swanky sexiness to it. 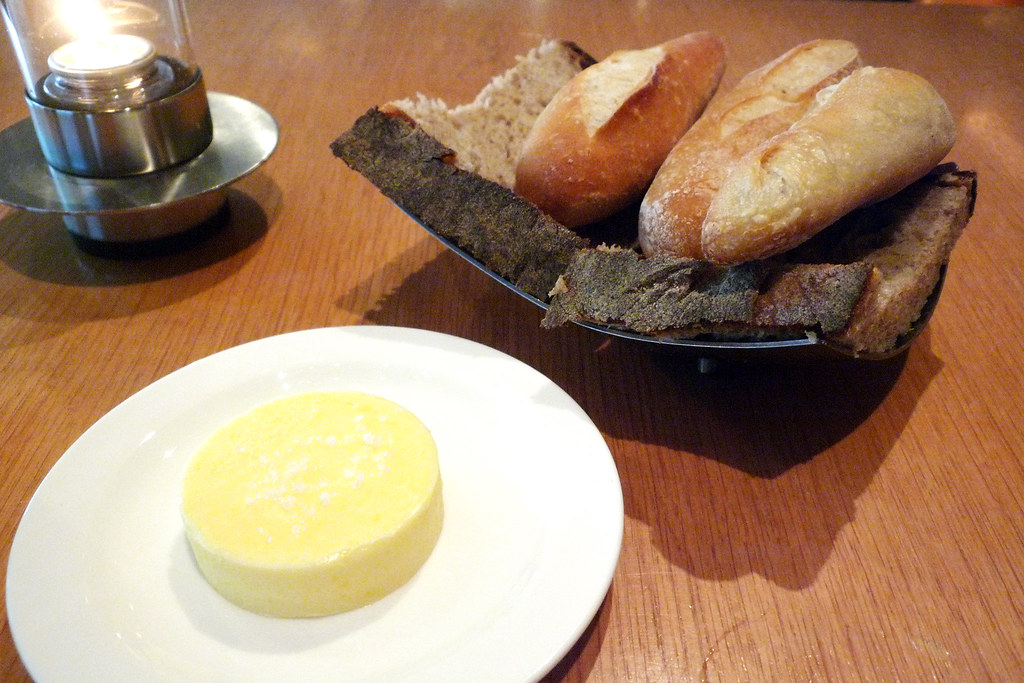 I was at The Modern for Restaurant Week, which was only available in the bar room. I obviously wasn’t the only one taking advantage of a $35 dinner as few tables in the bar room were unoccupied. Still, I was seated immediately at my reserved time and the bread deposited onto my table shortly after I made my selections from the three course menu. 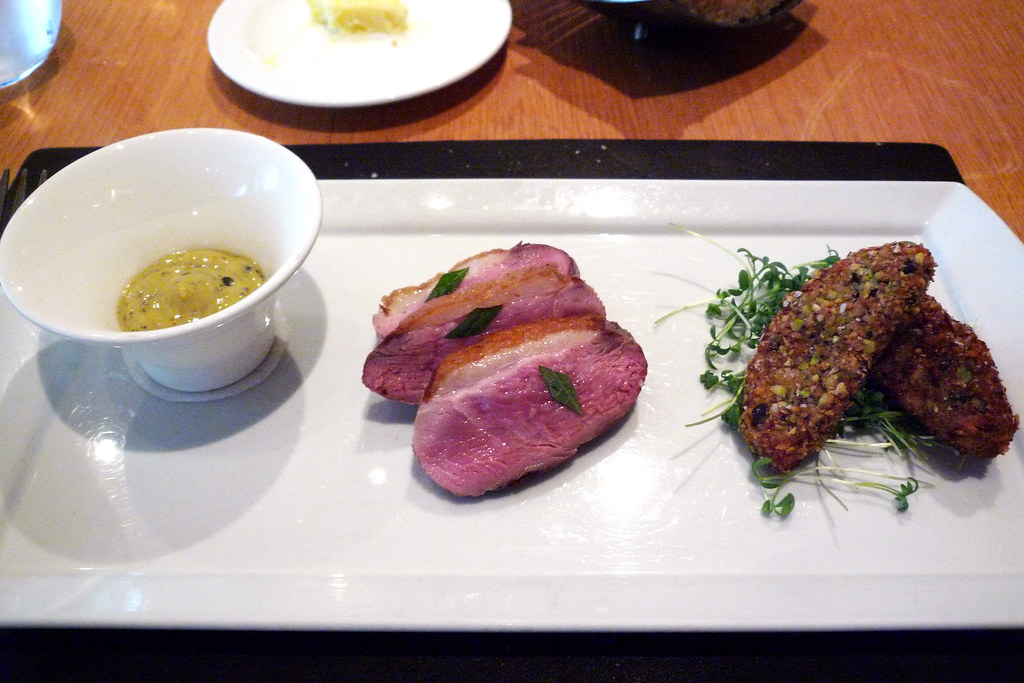 My first course was the Roasted Long Island Duck Breast. It comes with peppercorn-crusted apples and toasted pistachio-truffle dipping sauce. The duck breast was cooked to a beautiful pink-red color, leaving the meat extremely tender and juicy while the skin was slightly crispy. The duck breast practically melted in my mouth. And, of course, there’s the beautiful layer of fat between the skin and the meat – some might get turned off by the sight of unrendered duck fat but, man, do I loves me some duck fat. The apple slices added a nice, acidic counter to the fat while the truffle dipping sauce just adds to the richness of the dish. 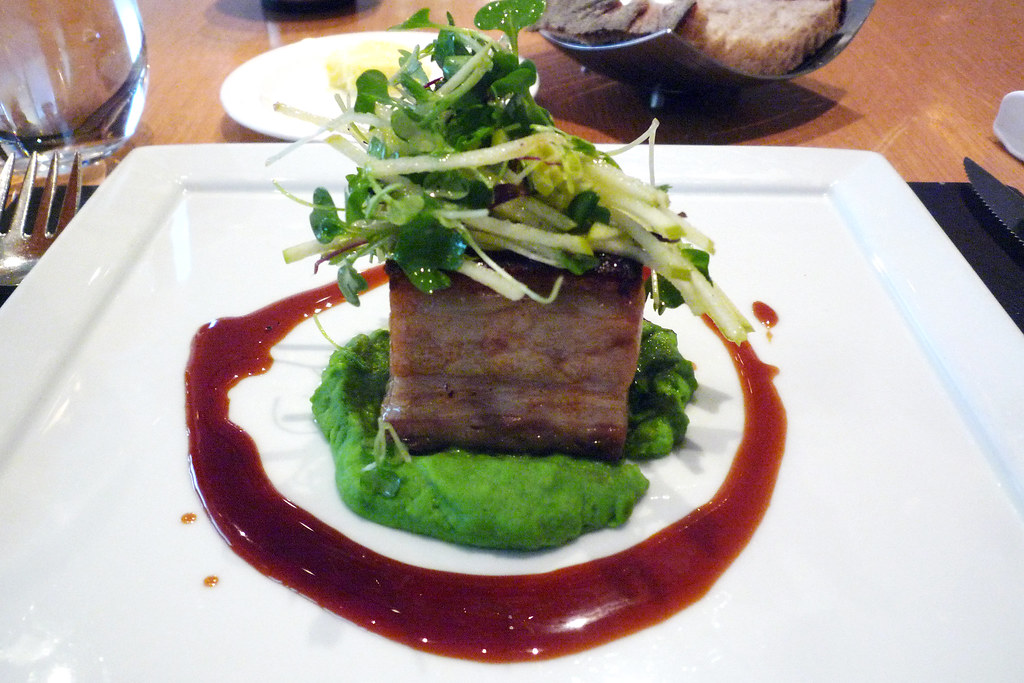 For my second course, I had the Beer-Braised Pork Belly. Of course I did – like I could pass on pork belly! The pork belly rests on a sweet pea purée and a ginger jus moat surrounds it. The above photo doesn’t do the pork belly justice, visually. The photo below, however… 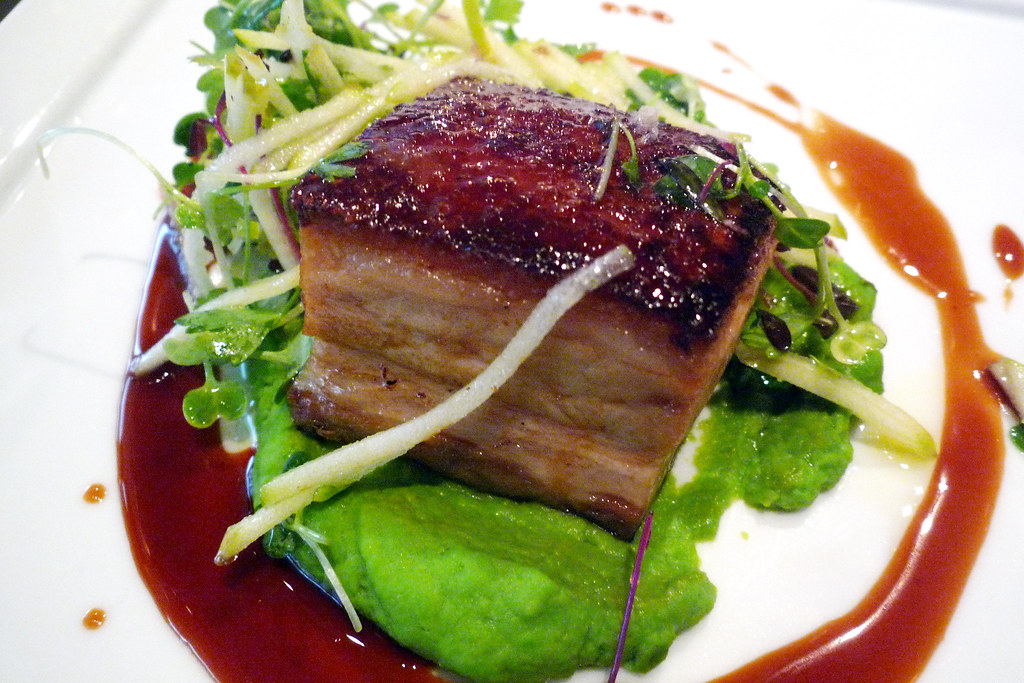 Ah, now you can see the crisp, caramelized skin atop the chunk of pork belly. The meat is juicy and was delicious. While the meat and fat were easy to cut, the skin was a little too crispy so it was kinda difficult to slice it and keep the layers intact. Minor quibble really and a problem easily solved once I made the decision to save the crispy skin for last – perhaps that’s what they wanted me to do? The sweet pea purée is almost an afterthought when pork belly’s involved but it was delicious and really went well with the pork. 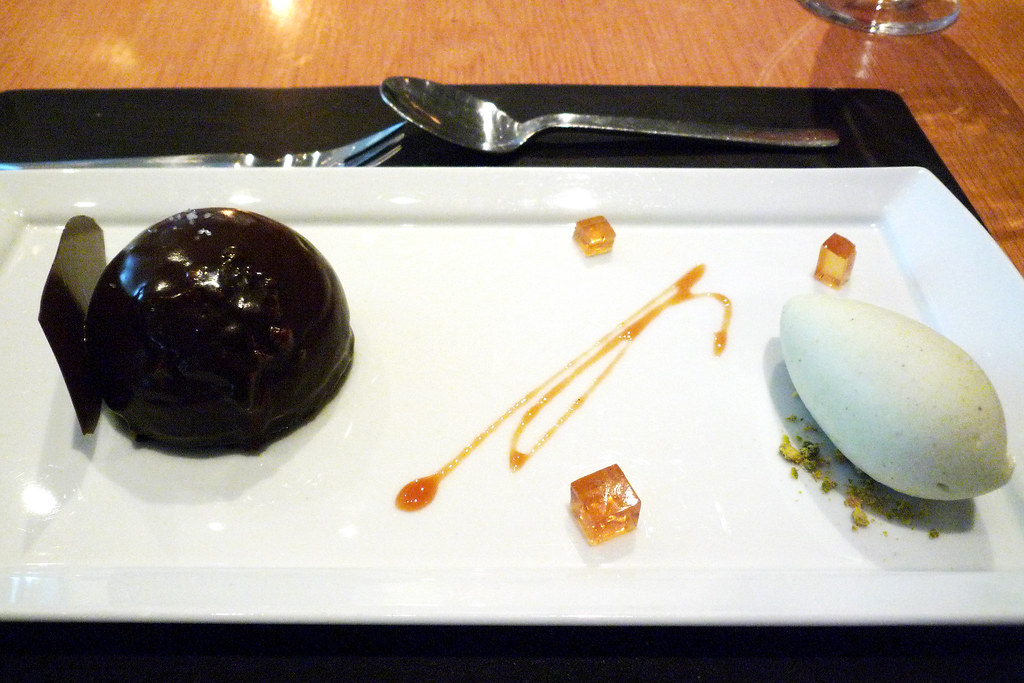 The final course is, as it always during Restaurant Week, a dessert. My choice was the Pistachio Dark Chocolate Dome and it came with pistachio ice cream and amaretto gelée. If you’re a fan of chocolate, then this dessert’s for you. Nothing spectacular here but it’s a solid finish to the meal.

There’s nothing more I can say about The Modern than that it’s yet another wonderful Danny Meyer effort. That much you can glean from the preceding paragraphs. The question, really, is how does this stack up among his other restaurants? Well, so far, I’ve only been to a few but I’d say that if Eleven Madison Park is the crown jewel, thus rendering comparison to that unfair, I’d say that this compares favorably with Gramercy Tavern (been once ages ago) and Union Square Cafe (never been and basing comparison purely on spec). The Restaurant Week menu made this a more affordable proposition; otherwise we’re talking about a pricey bar menu. A good one but an expensive one. Still, I’d like to think I’d make a return trip to sample more of the menu. Perhaps during Restaurant Week in January 2011.