In this solo cooking adventure, Gary adapts a traditional Singapore chicken dish to one more to his liking. 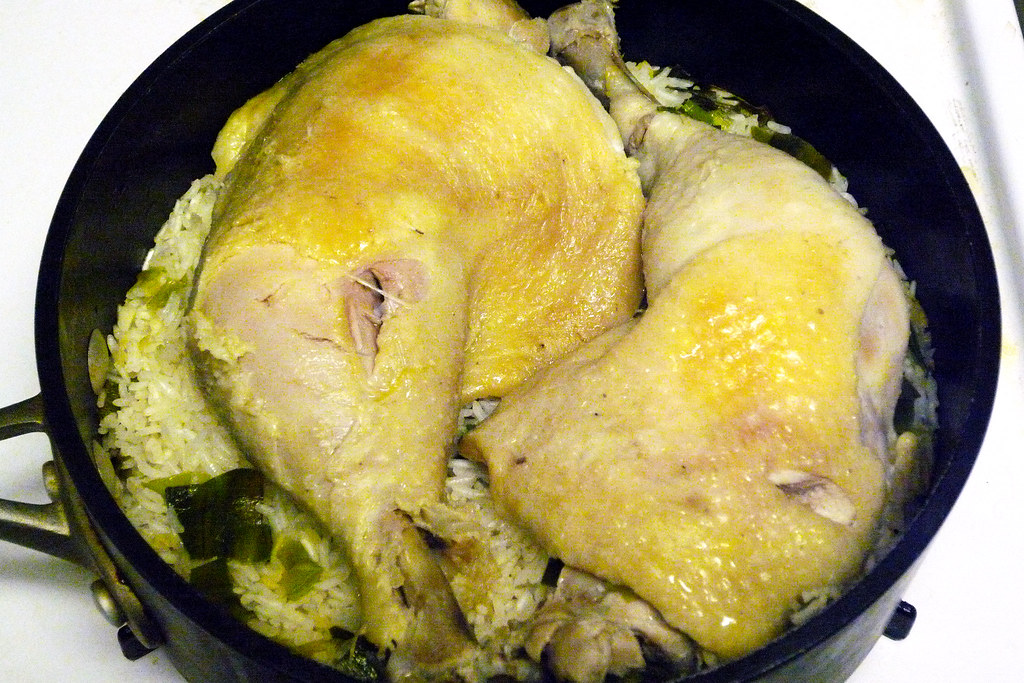 I don’t remember the first time I had Hainanese Chicken Rice but I know I’ve always loved it. After all, we’re talking about nicely cooked chicken atop rice that’s been cooked with the water the chicken once took a hot bath in. It may seem weird to eat boiled chicken, considering most Americans eat their chicken roasted or fried but we’re not talking about making a soup here – no boiling the chicken to within an inch of its life! Okay, we’re actually boiling the chicken but rather poaching it so it’s not so weird. Also, there is a sort of soup that will result from poaching the chicken but we’ll just be using it for flavoring the rice.

So I’ve come up with this recipe after some research online. It’s mostly authentic save for my usage of leeks instead of scallions. That’s more due to the fact that I had leeks lying around from a CSA share and I wanted to use them sooner than later. The big change I made was the chicken itself. Eschewing a whole chicken, I went with two whole chicken legs. Let’s face it, most people (myself most definitely included) prefer the moist dark meat of the legs and this makes it easier when it comes to serving sizes – one leg per person! 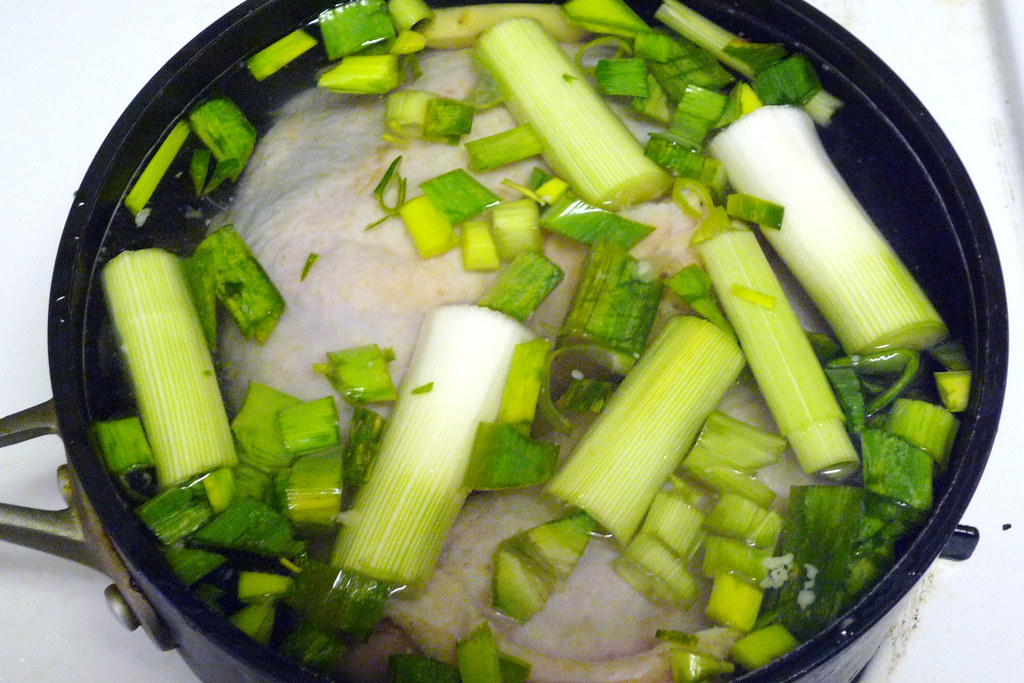 The cooking of this dish can essentially divided into two parts. The first is cooking the chicken in water that’s filled with ginger, scallions (leeks, in my case), and some sesame oil. When the chicken’s done cooking, it’s fished out, and we’re left with a delicious chicken broth. 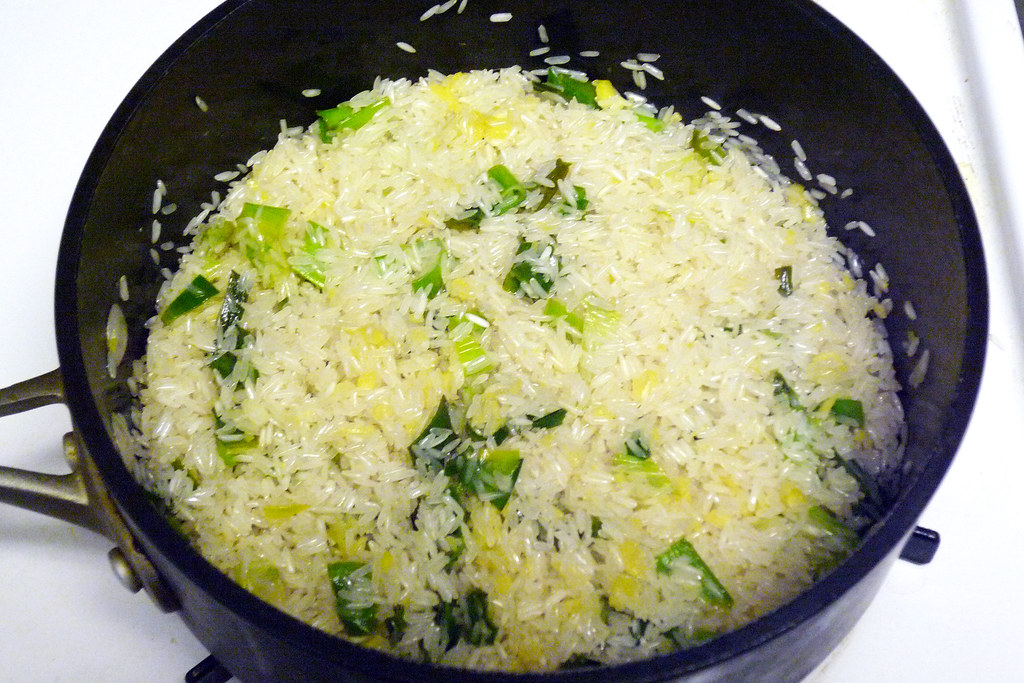 Heating up the rice before adding the reserved chicken water

The second part is, of course, the rice. It’s quickly heated up with the same aromatics and then the reserved chicken broth is added in place of water. Once the broth is fully absorbed by the rice, it’s time to serve. 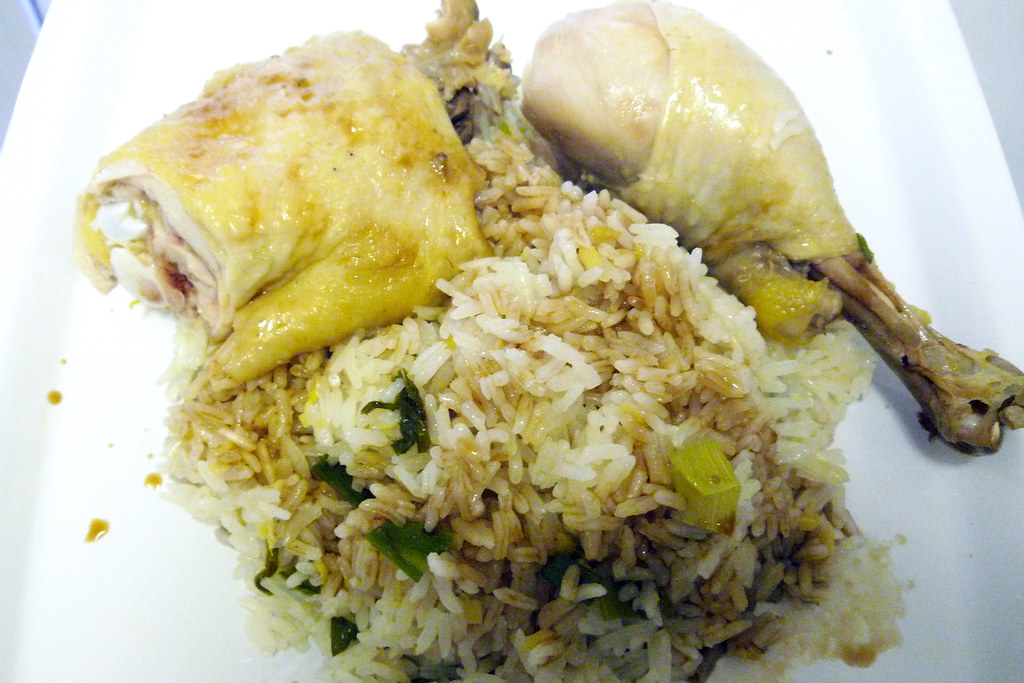 Not Quite Hainanese Chicken Rice

I actually made a quick sauce from the chicken broth, adding it to equal parts soy sauce. Plate the chicken and rice, drizzle the sauce, a few drops of sesame oil, and dig in.

Not Quite Hainanese Chicken Rice