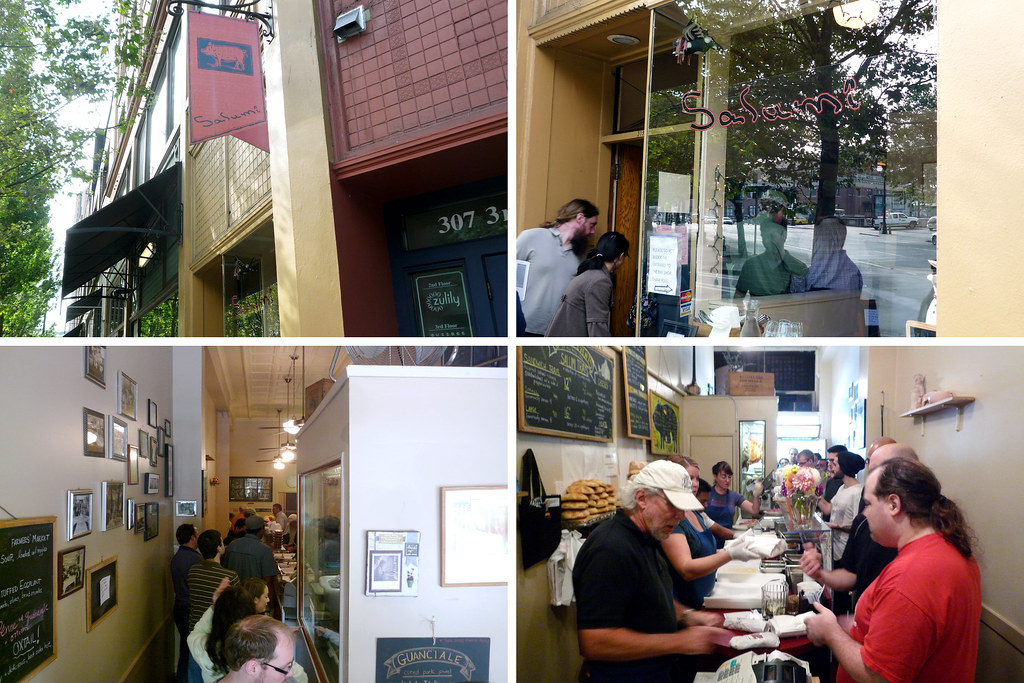 I think I first heard of Salumi Artisan Cured Meats place when I saw Anthony Bourdain come here for No Reservations. From what they showed on television, it looked like the kind of place I had to come to if I ever made it out to the Pacific Northwest. I mean, just look at the place – it’s practically porcine heaven as interpreted by the Italians. That it’s from Armandino Batali, the father of, yes, Mario, made it a no-brainer – no sense in coming to Seattle and not seeing how well the father follows his son’s footsteps. 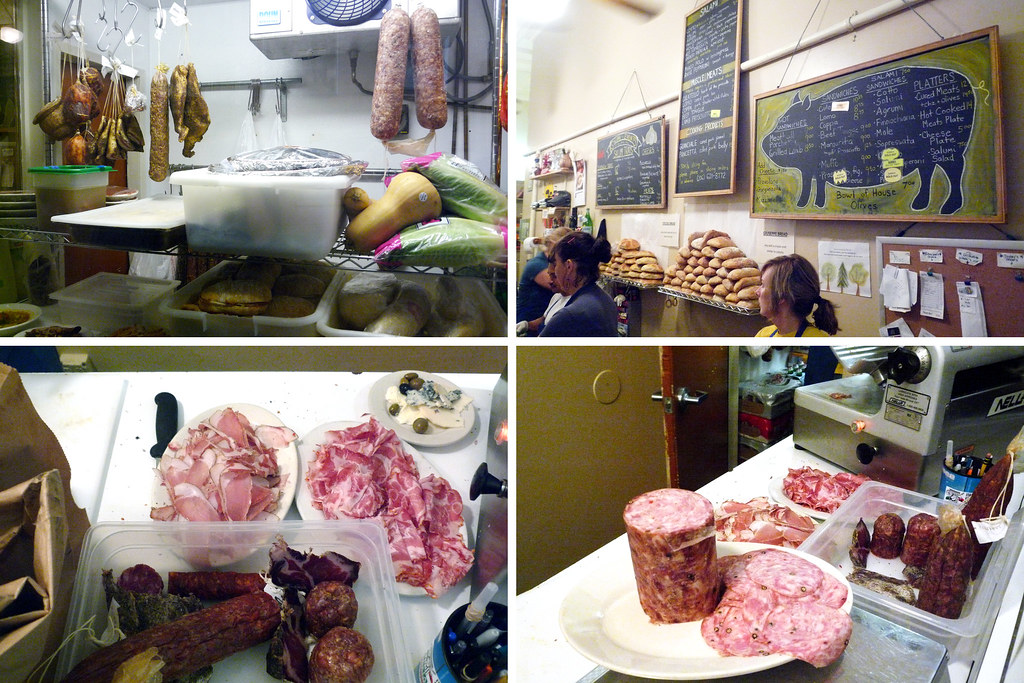 So as the name as well as the above photos imply, this place serves up the Italian cured meats. They must be doing it well because the line to get into this place is a lengthy one on a daily basis though, sadly, only on the weekdays. Even the passing of the torch from Papa Batali to his daughter and son-in-law doesn’t seem to have dampened the enthusiasm, a testament to the continued sustained quality of their meats. So when I showed up on a Friday morning, 11:02 am to be exact, it was no surprise to me that the line was already 20-plus persons long. And, folks, the place had just opened its doors two minutes earlier.

Standing on line, even for 20-30 minutes, isn’t completely terrible. It gave me a chance to talk to some of the folks waiting in line with me. The group of three in front of me had driven in from a nearby suburb for a quick lunch before going about their day while the group of 12 behind me (lucky me for running into line right before they walked up to it) were making a lunchtime outing to grab a few sandwiches to bring back to the office. Surprisingly, I think I may have been the only traveler here and certainly the only one from NYC. That inevitably led to questions about son Mario Batali’s restaurants and I could only respond with the usual answers – “they’re good, some better than others” – and then directed them to read Sifton’s bestowing of four stars on Del Posto if they wanted some superlatives. Not that I minded talking about his restaurants but I didn’t exactly want to be on the spot answering questions from a half-dozen people when all I wanted to do was peruse the menu. 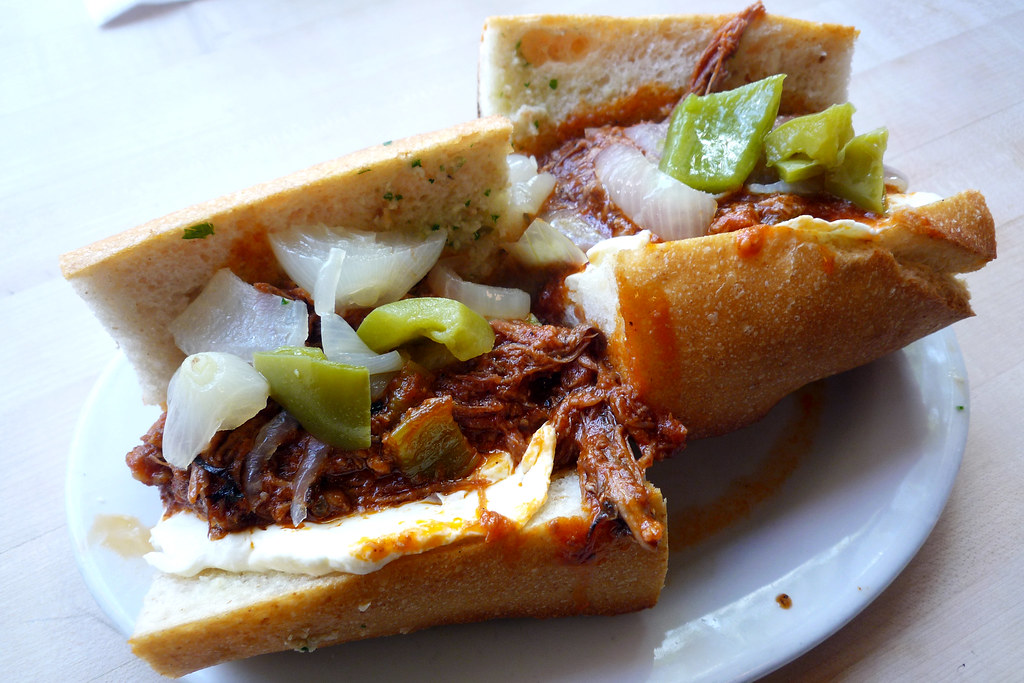 When I first got on line, I had intended on getting some sort of sandwich that would have plenty of cured meats and mozzarella. But then I saw the special of the day, an oxtail sandwich, and I was quickly sold. The oxtail is braised in a beautiful reddish-orange liquid and the sandwich is dressed with some sort of herbed oil before being stuffed with the shredded pieces of oxtail. For good measure, I also opted to add some fresh mozzarella to the sandwich, finishing it off with some peppers and onions.

It says on the chalkboard to eat the oxtail sandwich in the restaurant because it’s a messy one. They weren’t kidding. Just picking up half of the sandwich caused the reddish-orange liquid to slowly drip back onto the plate. Biting into the sandwich practically caused a gusher that would cause even BP to blush. The oxtail is just amazing here – a little greasy/oily but also extremely soft and tender but just enough chew so it’s not a mushy mess. The bread is solid too, able to keep its structure in the face of so much juice pouring forth from the meat. 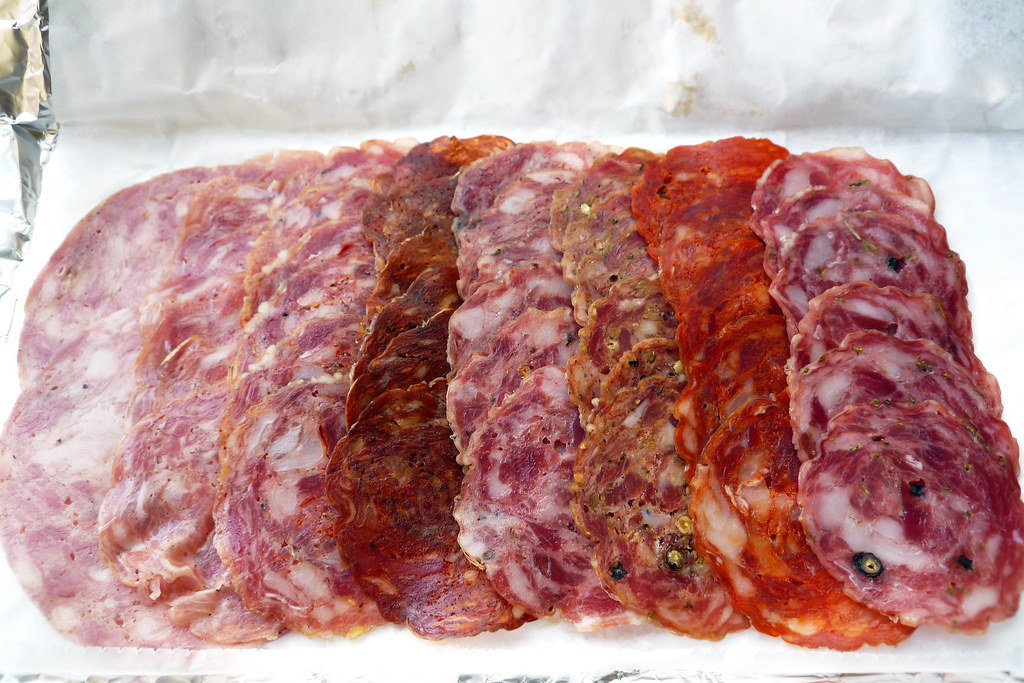 Since I didn’t get my cured meats in a sandwich, I opted instead to get them in a platter. It’s an astonishing array of eight different cured meats. Sadly, I don’t know what each one is but I will say that they were all certainly good while some were exceptionally so. None were overly salty though some definitely went a little nuts with the black peppercorns.

If you like Italian cured meats and you’re in Seattle, then you have no excuse not to come to Salumi Artisan Cured Meats. Yeah, the lines are long but it’s well worth the wait and it’ll give you time to look over the entire menu, specials and all. That way, you can end up ordering more than you ever planned on ordering. The prices here aren’t bad, not for what you get anyway. My sandwich was over $10 but it was a special – the normal ones are closer to $7 before adding the mozzarella. But why wouldn’t you want the mozzarella? It’s fresh and it tastes great. Heck, everything I had here was good. If Friday wasn’t the last weekday of my trip to Seattle, I’d probably have made a second trip to get a cured meats sandwich. Unless, of course, that day’s special catches my eye as well…