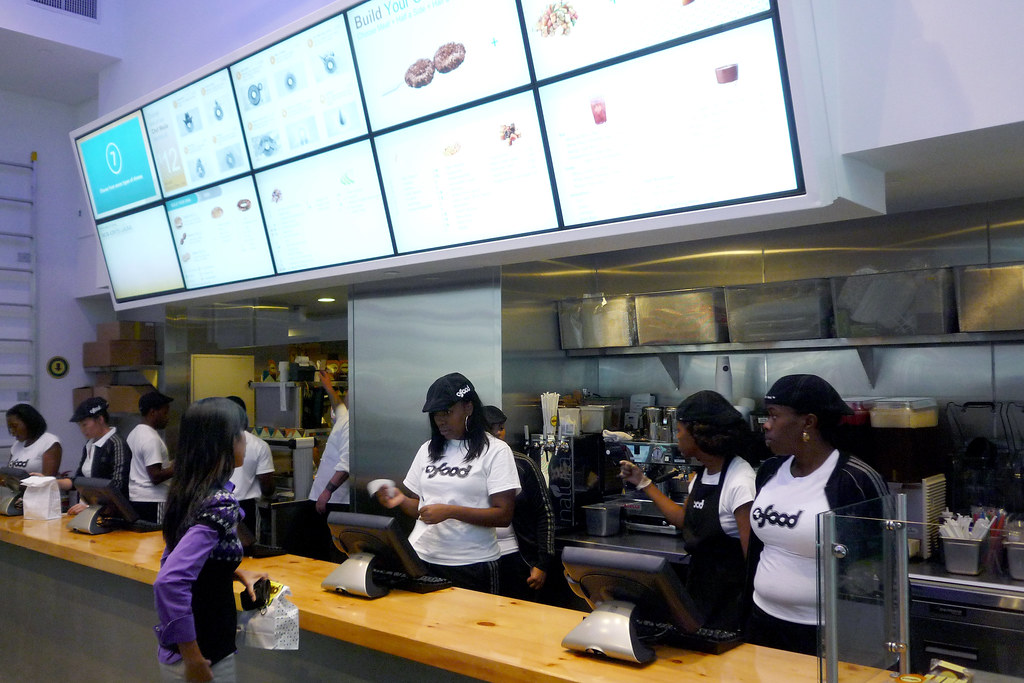 One of my first assignments for Eater was to take photos of the still in construction 4food in Midtown. Until then, I knew nothing of the place. It wasn’t until the door swung open to let a construction worker pass that I was able to get a good glimpse inside at the giant digital leaderboard which is when everything became clear to me – this was gonna be a futuristic, tech-savvy place. Over the next few weeks, I read up on their embracing of social media as well as their commitment to the environment and I was pretty stoked to eventually try the food here.

Then I found out their burgers were going to be donut-shaped and all hope faded for me. There’s gimmicks like being high tech and then there’s the kind that muck with the food, which just generally serves to piss me off. Honestly, I was all but ready to write the place off and remove it from my list but then I found out they were offering a $12 credit for new accounts on their website so I figured it’d be worth the free meal. I passed the info onto my friend Won and we decided to meet up for lunch a few weeks back so we could finally see what the 4food experience was all about. 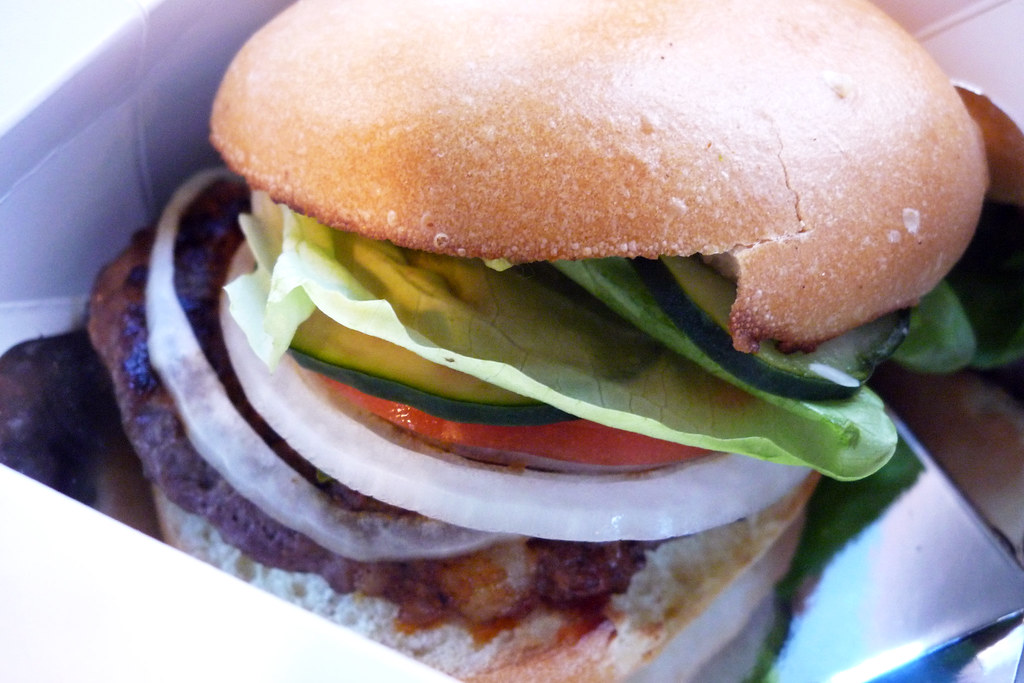 I ordered a burger that was a beef patty (minus the middle for the hole, of course) with some avocado and sopressata on top. Inside my burger hole was a scoop of potato and chorizo hash. For good measure, I added lettuce, tomato, pickle, and onion. Just from looking at it, you can tell that it’s not gonna be a great burger. The brioche bun my burger came in was stiff and looked like it’d been lacquered stiff. Between the buns was this one hot giant mess and I don’t mean that in the sexy way. The burger was absolutely bland and the chorizo hash did nothing to help it. The avocado and sopressata did help, adding some fat and much needed salt to the burger but not nearly enough to save it. Even worse was the fact that this burger was hardly filling. 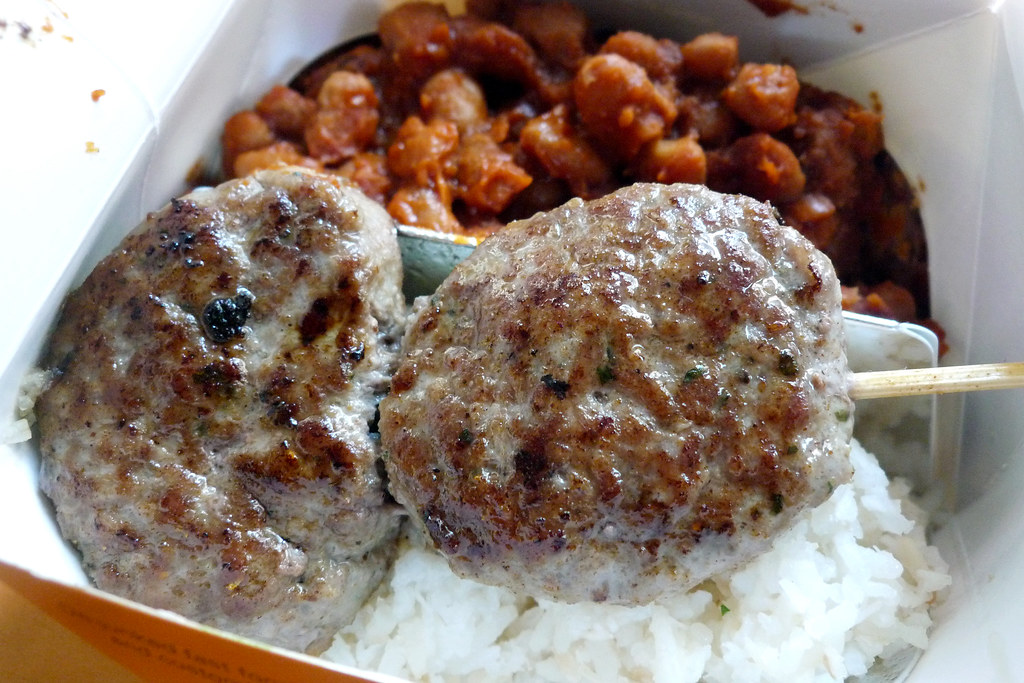 Which is why I was thankful I utilized my credit fully by ordering the lamb skewer with coconut rice and baked beans. I should say that I was thankful but then I actually started eating it and I immediately regretted my decision to go with lamb. The lamb skewers appeared to be the holes that would be cut out from the burger patty with a skewer put through them – if that’s the case then good for them for making sure nothing is wasted. I don’t know where they source their lamb from but it had a very weird finish that was tart, almost rancid really. I can’t really describe it except to say it was like eating bad goat cheese. I’ve had ground lamb many times and I don’t ever recall that flavor sensation. The coconut rice was fine in terms of flavor though definitely mushy. The baked beans were dreadful – the less said, the better. 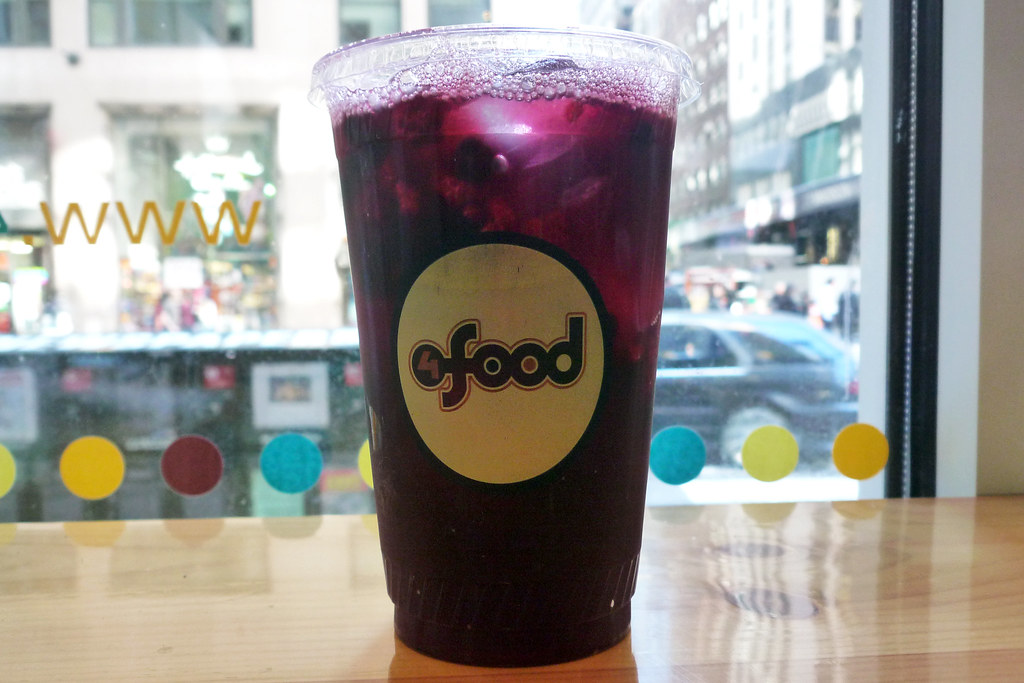 The best part of my meal was, without a doubt, the hibiscus tea that came with the skewer meal. Yes, it’s just frozen berries and tea but it was the absolute perfect palate cleanser after the funky lamb.

I’m gonna be indelicate because there’s no real artful way of putting it – 4food is terrible. It is absolutely, beyond a doubt, awful. Which is a shame really because they’ve embraced technology, social media especially, and their ethos of environment and sustainability is laudable. And while places like FoodParc have gotten it right when it comes to the technology and countless others are embracing the environmental movement, all 4food can really do to put itself above the pack is to put out good food. From the meal I had, I rather imagine that’s something that got lost amidst the technology and sustainability.

Again, I’ll note that I came here with a $12 credit just for signing up on their website. This meal came out to $12.50. Was it worth the 50¢ I spent? I won’t be a total jackass and say that it wasn’t. I can definitely say that I’m glad I didn’t pay the full freight on this meal. I recommend you sign up on the site anyway so you can all have the culinary experience Won and I had.