In this solo dining adventure, Gary complements the previous night’s Thomas Keller experience with lunch at Bouchon in Yountville, CA. 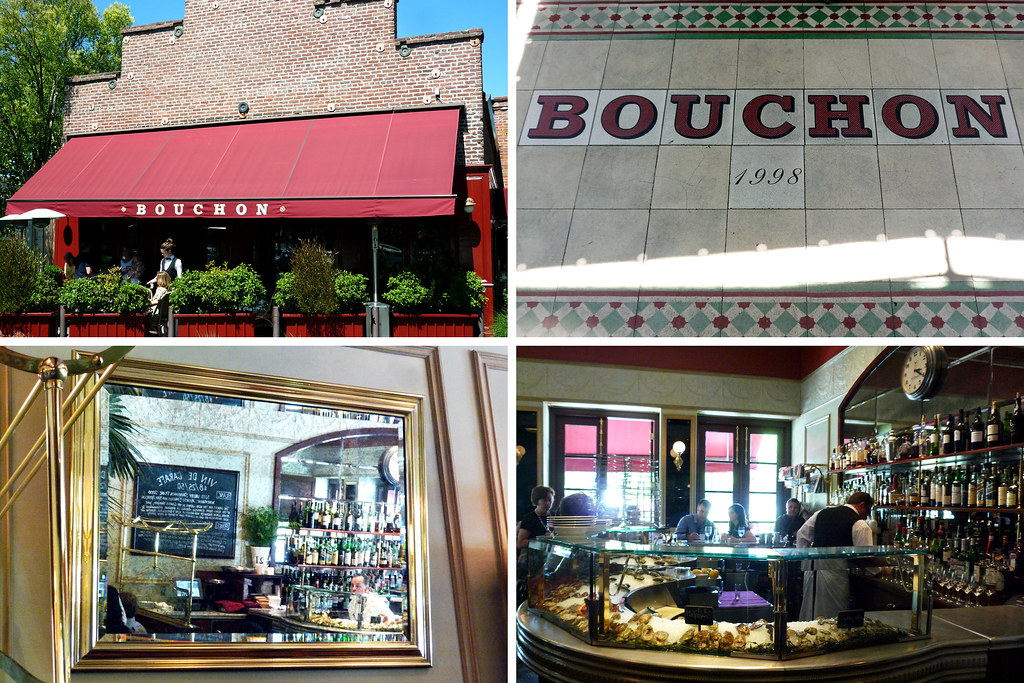 Alright, part two of the Thomas Keller dining adventure! This time, my college buddies and I went to Bouchon for lunch the day after dinner at Ad Hoc. Bouchon is the second restaurant Keller opened, the first being The French Laundry, which is just down the street from here, as well as being not too far away from Ad Hoc. Unlike his other two Napa Valley restaurants, Bouchon is a strictly à la carte affair, serving the sort of stuff you would expect to find at a very fine French bistro.

The interior and ambiance is what you’d expect to find in a French bistro setting – plenty of white on the walls, a reliance on natural light with the aid of some well placed mirrors along the walls to brighten an otherwise dimly lit space. The servers are dressed in a very classic, classy manner but don’t let that fool you into thinking it’s an exceptionally stuffy setting. Our server was more than accommodating in answering our questions regarding portion sizes, the specials, and recommendations. It’s honestly the level of service I expected but it’s always nice when said expectations are met. 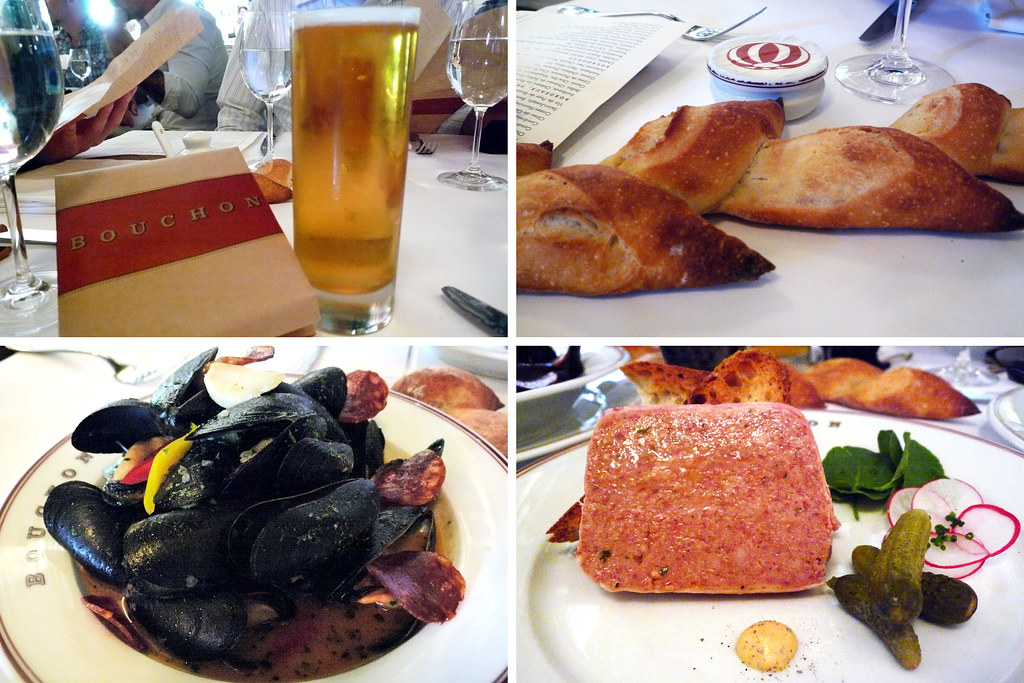 We started with a few appetizers, the Moules (mussels) which came with fries (not pictured) and the Pâté de Campagne (country style pâté). The mussels here are cooked in a nice broth that gets some additional salt and spice from the cured meats slices. The pâté came with watercress, cornichons, and radishes, as well as some crusty, crunchy toasted bread to spread it on. Well seasoned, rich, and meltingly spreadable on the bread, it was a luxurious start to our lunch.

The bread here is phenomenal. It comes out as one long chain that you pull a piece from for yourself. When it comes out warm, it’s just about the best damn bread you can ever hope to eat. The butter they give you to spread on the bread is great too but this bread hardly needs any additional flavor – it’s that good. 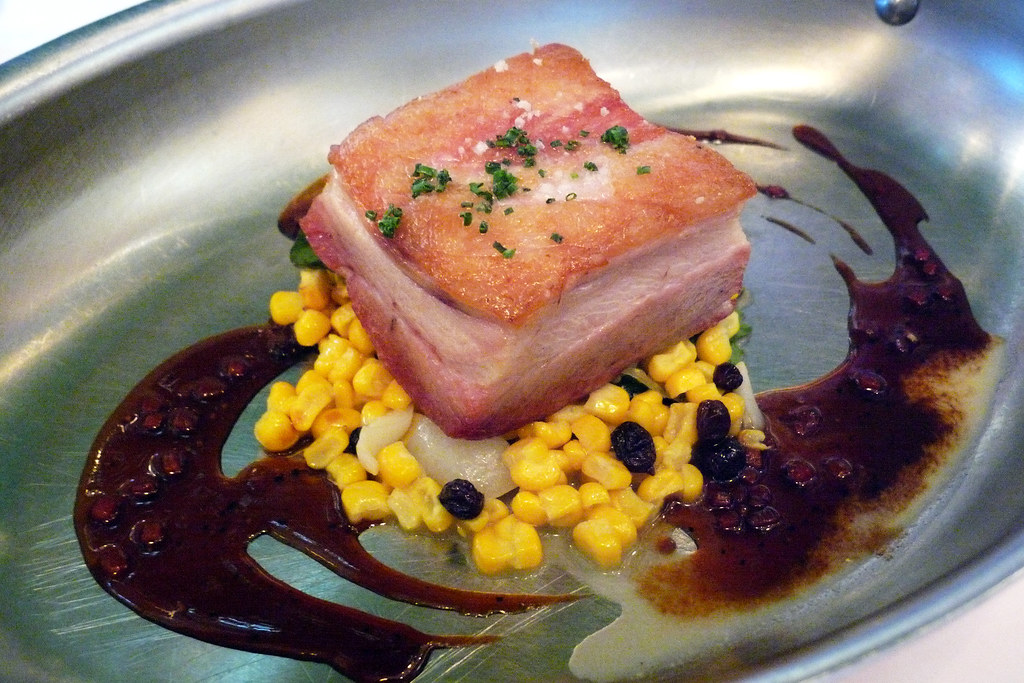 For me entree, I actually went with the day’s special, pork belly with corn and onions, served in an All-Clad pan. The components of the sauce around the pork belly eludes me – I think it might have been pomegranate. It was a well done dish for the most part but I’m sad to say that I’ve certainly had better pork belly. It’s certainly well executed – the skin was crisp and the meat was moist – but it almost seemed as though it rested on the reputation that pork belly carries, if that makes any sense. It just seemed as though it was almost too simple a preparation. A fine dish but hardly noteworthy. 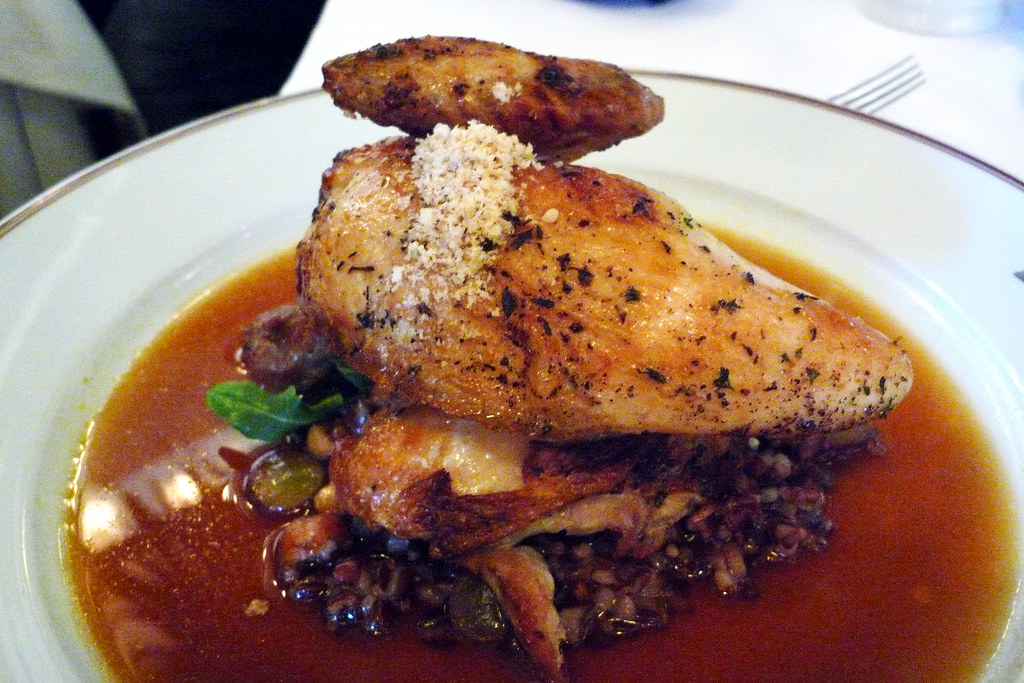 Jeremy had the Poulet Rôti, a roasted chicken with Savoy cabbage fondue, garden salsify, honey-glazed cranberries, and chicken jus. Thomas Keller is said to make a mean, but simple, roast chicken and the man freakin’ delivered here. If Jeremy could have, he would, in the immortal words of a local news anchor, “keep f*ckin’ that chicken.” 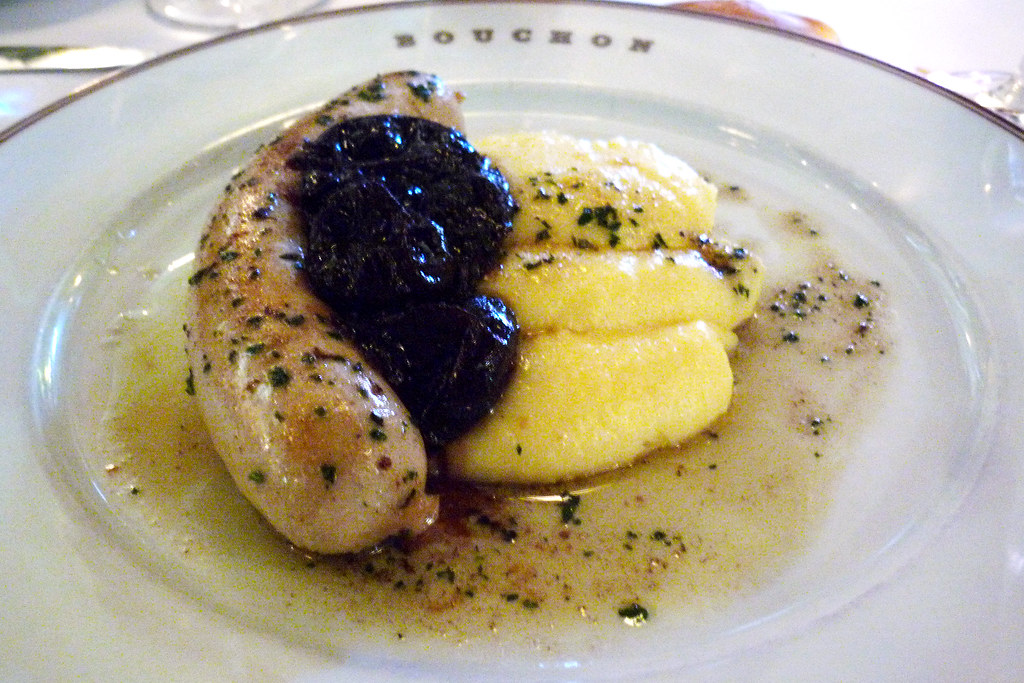 Justin had the Boudin Blanc, a white sausage with potato purée and French prunes. He described it as “nice, well spiced, and paired well with the stewed prunes.” I had a little bit of the sausage, which was indeed nice, but I almost preferred the mashed potatoes which were delicately wonderful. 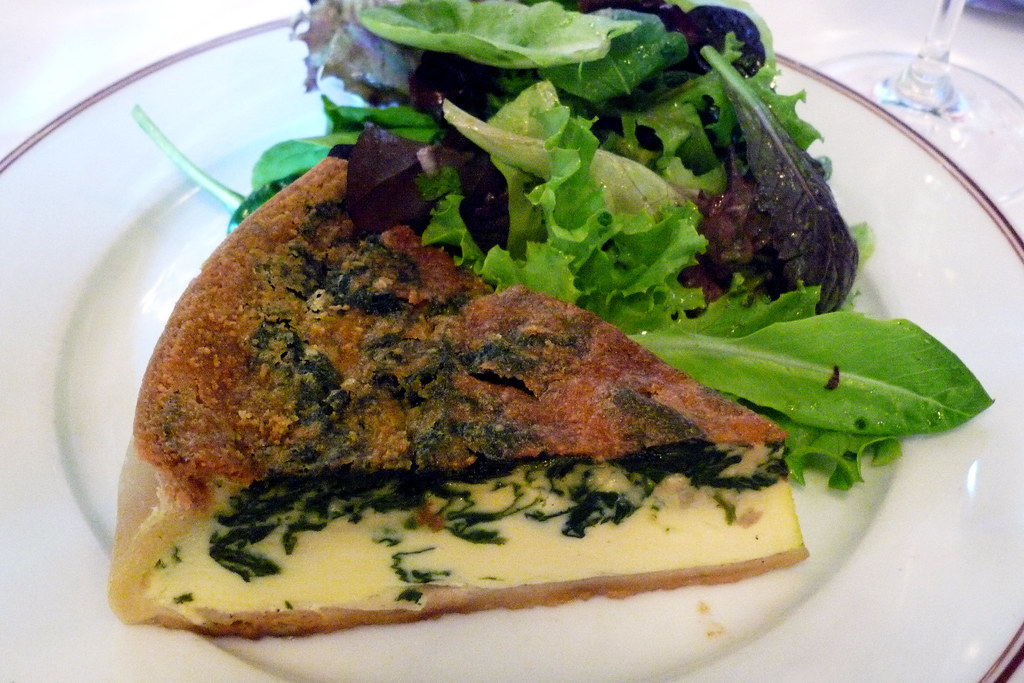 Aaron had the Quiche du Jour, which I didn’t get a chance to try or to get his thoughts on. It certainly looks nice though.

For a place that chef/owner Thomas Keller once joked that the motivation for opening “was to give him somewhere to eat after work at The French Laundry,” Bouchon has clearly grown to become a tour de force in its own right. After all, you don’t earn your very own Michelin star on a chef’s reputation alone. The service and quality of food here certainly merit that star. Don’t let my less than enthusiastic appraisal of the the pork belly let you think otherwise – I’m just a little difficult to please when it comes to pork belly since I’ve had so many that were out of this world that theirs, albeit a fine one, just didn’t measure up. But everything else about the place here – yes, again with the service as well as the other food we had – leaves me with little doubt that Thomas Keller is THE preeminent chef/restaurateur in this country. My only question to him would be “when the heck are we getting a Bouchon proper in New York City?”